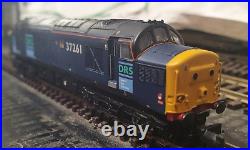 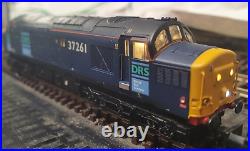 371-471 GRAHAM FARISH CLASS 37/0 NUMBER 37261 IN DIRECT RAIL SERVICES BLUE FITTED WITH DCC SOUND. A BRIEF HISTORY OF THE LOCOMOTIVE. The British Rail Class 37 is a diesel-electric locomotive. Also known as the English Electric Type 3, the class was ordered as part of the British Rail modernisation plan.

They were numbered in two series, D6600-D6608 and D6700-D6999. The Class 37 became a familiar sight on many parts of the British Rail network, in particular forming the main motive power for InterCity services in East Anglia and within Scotland. They also performed well on secondary and inter-regional services for many years. The Class 37s are known to some railway enthusiasts as "tractors", a nickname given due to the similarities between the sound of the class's engine and that of a tractor. As part of the large scale dieselisation brought about by the British Rail modernisation plan a need was identified for a number of type 3 locomotives of power output 1,500 hp (1,100 kW) to 1,999 hp (1,491 kW).

English Electric had already been successful with orders for type 1 and type 4 diesels, and had produced locomotives of similar power for railways in East Africa. A design based on the exported locomotives was put forward and accepted.

The design was for a general purpose locomotive and initially found service in British Rail's Eastern Region. WHATS INCLUDED WITH THE MODEL. A 371-471 Graham Farish N Gauge Class 37 in USED CONDITON, see below for more details. Smooth runner, with a decoder run time of 10:55hrs.

Fitted with a single 15x11mm speaker. Powered by an ESU LokSound 4v Micro. Sound file provided by LegoMan Biffo. PLEASE NOTE THIS CLASS 37 IS MISSING ITS CAB END RADIO ANTENNAS. AN EXAMPLE OF THE FUNCTION SHEET.

Buffering up (when moving) /. The locomotive will start to push a wagon. A short distance at approximately 15 mph scale speed, before returning to its original position.

For use with automatic uncoupling track sections, magnets etc. (CV 246 = 42, CV 247 = 84, CV 248 = 84). Active Brake, Dump, and Parking Mode. A replacement for the Dynamic Braking as seen on CR Signals locomotives fitted with the LokSound V4. Service Brake is your standard brake mode, and will decrease the stopping time by approximately 80%, giving the user more control over deceleration. Activating the Service Brake will also start to steadily reduce and limit the speed of the locomotive to approximately 45mph (about half the top speed), giving the user the ability to "Cruise" the locomotive at a steady pace, without adjusting the throttle e. On the approach to the station or junction, you can leave the throttle wide open, and activate F5, the locomotive will start to slow through the station, once the locomotive has cleared the station you can deactivate F5, and the locomotive will start to power away. Referred to as "Brake 1" by ESU. Light Engine / Heavy Train Modes. With F22 switched off (the default setting) the locomotive will behave as if it is running without load (Light Engine), quickly accelerating away and stopping in much shorter distances. Activating F22 will switch the Locomotive into Heavy Train Mode, greatly increasing the acceleration times, and simulating the amount of power the engine needs when accelerating. Increase the stopping distances of the locomotive, when compared to Light Engine. Referred to as "Optional" and "Primary" load by ESU. Station Cruise and Dynamic Break. Reduces the braking distance by 40% and limits the top speed to approximately 30mph.

For more control of speed, in and around stations. Can be used with F5 for increased braking.

Yard Cruise, Dynamic Brake, with Yard Pilot lighting. Reduces the braking distance by 20% and limits the top to approximately 15mph. For more control of speed, in and around yards. Also displays marker lights, head lights, and red lights, in the direction of travel. This can be toggled in combination of F0.