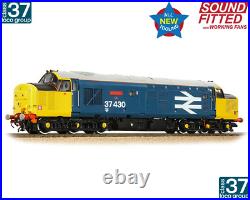 Bachmann 35-335SFX Class 37/4 37430'CWMBRAN' BR Blue Large Logo Sound Fitted. During this period such defects that occur will be repaired or defective parts replaced free of charge. Late claims will not be considered. Models are sent at the owner's expense and risk directly to Bachmann.

If Bachmann chooses to replace a product it will be with the nearest appropriate model of its choice. Bachmann reserves the right to decline service to any model that has been fitted with a decoder after manufacture. It may be necessary to change decoder settings during service. Claims during year two should be made directly to Bachmann and claims must be submitted with a valid Bachmann Collectors Club membership number and a return postal address which matches the one held on record against that membership.

All proceeds from this item goes towards the resurrection of 37003 for her 60th Anniversary. Introduction The Class 37 Locomotive Group (C37LG) is a group of rail enthusiasts dedicated to preserving and operating working examples of English Electric Type 3 (British Rail Class 37) locomotives for the general public, and to promote their interest and history, being part of our nation's industrial and railway heritage. The C37LG is a non-profit making organisation, and is registered as a Charity Reference Number : 1137787.

The group has members all over the country, and internationally, and is managed by a committee elected by members. 37003 : Released 28 December 1960 from English Electric Vulcan Foundry, Works Number EE/VF2866/D582, numbered D6703 in British Railways all-over green, and part of the first batch of Type 3s (D6700-D6703) delivered during 1960. Later, she was allocated to various other Eastern Region depots: Tinsley, Thornaby, Healey Mills, Gateshead and Immingham.

Our loco has carried two names: in April 1963 she was named "First East Anglian Regiment", but the name was never unveiled; much later, while based at Tinsley in 1989, 37003 received an unofficial'painted-on' nameplate "TIGER MOTH", which she carried until overhauled at Doncaster in 1992 (and repainted in'Dutch' civil engineer's livery). She was then rebuilt pretty much from the ground up: everything from installing a new power unit from 37073! Via rebuilding the cabs down to refitting the original buffer-beam skirts - until in 2003 she was restarted for the first time in preservation. By late 2004, in a fresh coat of Rail Blue and with reinstated headcode blinds, she was ready to haul her first passenger train since her BR days. 37003 is currently at UKRL in Leicester being restored to 1960's condition. You can follow her progress in the Loco Progress section of our website. If you like what you see, why not join us via the Membership section of our website, or just send us a donation via the donate link on our websites front page. This item is in the category "Collectables\Model Railways & Trains\Railways & Trains\Locomotives". The seller is "c37lg" and is located in this country: GB. This item can be shipped to United Kingdom, Antigua and Barbuda, Austria, Belgium, Bulgaria, Croatia, Republic of, Cyprus, Czech Republic, Denmark, Estonia, Finland, France, Germany, Greece, Hungary, Ireland, Italy, Latvia, Lithuania, Luxembourg, Malta, Netherlands, Poland, Portugal, Romania, Slovakia, Slovenia, Spain, Sweden, Australia, United States, Bahrain, Canada, Brazil, Japan, New Zealand, China, Israel, Hong Kong, Norway, Indonesia, Malaysia, Mexico, Singapore, Korea, South, Switzerland, Taiwan, Thailand, Bangladesh, Belize, Bermuda, Bolivia, Barbados, Brunei Darussalam, Cayman Islands, Dominica, Ecuador, Egypt, Guernsey, Gibraltar, Guadeloupe, Grenada, French Guiana, Iceland, Jersey, Jordan, Cambodia, Saint Kitts-Nevis, Saint Lucia, Liechtenstein, Sri Lanka, Macau, Monaco, Maldives, Montserrat, Martinique, Nicaragua, Oman, Pakistan, Peru, Paraguay, Reunion, Turks and Caicos Islands, Aruba, Saudi Arabia, South Africa, United Arab Emirates, Chile, Bahamas, Colombia, Costa Rica, Guatemala, Honduras, Jamaica, Kuwait, Panama, Philippines, Qatar, Trinidad and Tobago, Uruguay, Vietnam.