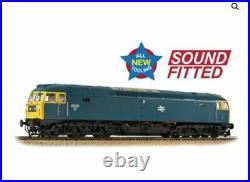 With high fidelity mouldings, numerous separately fitted parts and countless tooling variations to capture the minutiae of the real locomotives throughout their lives - ensuring each model is faithful to its prototype - our new 47 is brought to life with an exquisite livery application using true-to-prototype colours, fonts and logos. Along with an unprecedented array of lighting features, our new Dual Fitted speaker system is fitted to all models bringing to life our SOUND FITTED models. For the ultimate experience, choose our SOUND FITTED DELUXE models with their ground breaking motorised radiator fans and authentic tinted windscreen glazing! Pristine BR Two-Tone Green (Small Yellow Panels) livery.

Directional lighting, switchable on/off at either end on DCC or Analogue control. Cab lighting, assigned to two DCC functions for separate switching of each. Separately switched Engine Room lighting (when used on DCC). Authentic light colours and temperatures selected for each model based on era and application. Two quality speakers employed for optimum sound reproduction, fitted to every model as standard.

The resulting design became the iconic Brush Type 4 Diesel locomotive, a practical, versatile design with a very distinctive cab. Powered with a Sulzer engine and initially rated at 2,750hp, the locomotive could achieve a top speed of 75mph with a tractive effort of 55,000lb.

Building commenced in January 1962 and the first locomotive No. D1500 appeared in late September of the same year with test runs on the London Midland Region and Western Region. The design was a success and BR went on to order a total of 512 with continuous production through to early 1967, forming the largest single class of main-line diesel locomotives in the UK. During this time and subsequent years, several variations appeared with an increase in speed and tractive effort to 95mph and 62,000lb respectively. Originally fitted with four character train reporting head-codes, these changed to marker lights, with the addition of high intensity lights and roof aerials in the late 1980s. Other variations involved the fitting of different types of steam heating boiler for early BR coaching stock, later replaced with electric train heating for use with modern rolling stock. The numbering system started with four figures but changed to five with the introduction of the TOPS coding system which saw the locomotives classified as Class 47 Diesels with variations such as 47/0, 47/2, 47/3, 47/4 and 47/7. By the end of the 1990s, half of the Class 47 fleet had been withdrawn or scrapped, 33 have been converted into Class 57 locomotives and several have been preserved, including the original No.

How it started; I have been interested in model trains since I was a child. My dad gave me the train bug.

It was more fun and much cheaper, now I can fix most locos so they run like new. Used model railways & collections always wanted. Drop us a line or just pop in for a visit to Peters Spares Model Railways ltd where our staff who are all railway modellers are always happy to help. Or sign up to my shop newsletter.

Thanks From Peters Spares Model Railways Ltd. It has a selection of choices relating to your country of origin & a quantity option. Instead, please request or await an invoice. If you are purchasing from overseas please request an invoice before paying for combined orders.

The address to which goods must be sent is, Peters Spares Model Railways Ltd, Unit 2J Brighouse Business Village, Riverside Park, Middlesbrough, TS2 1RT, without undue delay and in any event not later than 14 days after the day on which the consumer informs the trader of the cancellation. Peters Spares Model Railways Ltd, fully complies with, The Consumer Rights Act 2015. The Consumer Rights Act 2015 became law on 01 October 2015, replacing three major pieces of consumer legislation - the Sale of Goods Act, Unfair Terms in Consumer Contracts Regulations and the Supply of Goods and Services Act. The following are statutory rights, under a goods contract. Goods to be of satisfactory quality.

Goods to be fit for particular purpose. Goods to be as described. Other pre-contract information included in contract. Goods to match a sample.

Goods to match a model seen or examined. Trader to have right to supply the goods etc. If statutory rights under a goods contract are not met. Consumer's rights to enforce terms about goods. Time limit for short-term right to reject. Right to repair or replacement.

The seller is "petersspares" and is located in this country: GB. This item can be shipped worldwide.