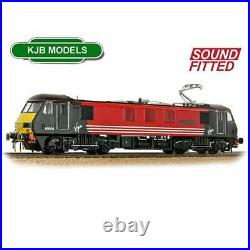 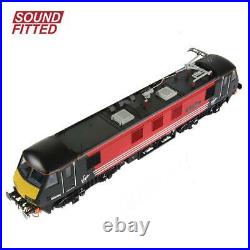 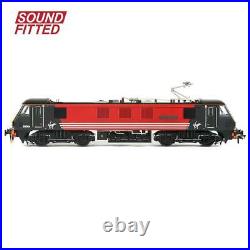 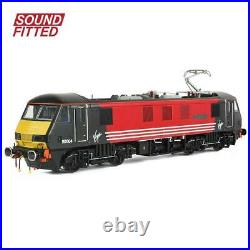 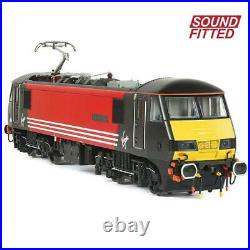 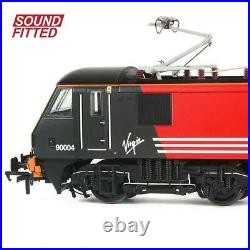 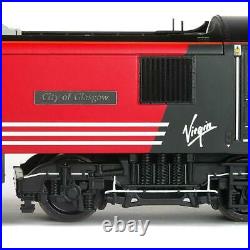 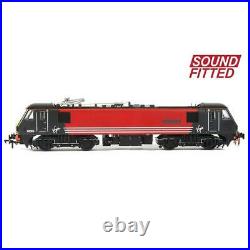 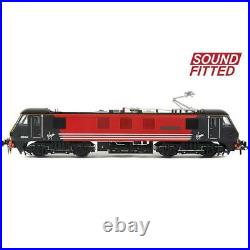 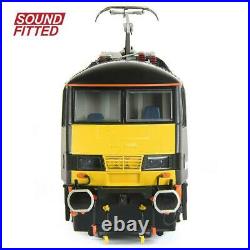 32-615SF DCC SOUND FITTED Cl 90 004 City of Glasgow Virgin Trains. Brand new model from our new Yorkshire model railway shop. Analogue Users: Please note that any automated drive sounds will be played when this model is used on analogue control (DC) straight from the box! Look no further than the Branchline Class 90 if you're searching for the pinnacle in British OO scale Electric locomotives. Combining a highly accurate and detailed body shell with an authentic chassis and bogies - each featuring a wealth of separately fitted detail - the Branchline Class 90 captures the distinctive shape and character of the real locomotives to a tee.

Add to this the multiple lighting functions and their realistic operations, such as the Day or Night mode for the directional lighting and the cab lights that illuminate only in the direction of travel and when the model is stationary, and its easy to see why this model is the complete package. What's more, when used on DCC the Pantograph, which itself is a fine reproduction featuring metal components, can be operated remotely via the built-in servo motor, meaning you can raise and lower this characteristic feature at any time, without having to intervene by hand. This SOUND FITTED model will take your enjoyment to the next level with its authentic sound effects, whether used on DCC or analogue control, and DCC-operation of the of the motorised pantograph. Pristine Virgin Trains (Original) livery.

SOUND FITTED - Fitted with a ESU Loksound V5DDC Sound Decoder - See below for the function list. DETAIL VARIATIONS SPECIFIC TO THIS MODEL.

Separate metal bearings fitted to each axle. Gearing arranged for prototypical running speeds and haulage capabilities. 5mm (OO gauge) wheels to NEM310 & NEM311 standards with authentic profile and detailing. Close coupling mechanism fitted at each end, each of which is fitted with coupling pockets to NEM362 standards.

Designed to operate on curves of second radius (438mm) or greater. Metal Pantograph, sprung for posing in the up or down position, or can be raised/lowered via the built-in servo motor when operated on DCC. Bogies constructed from multiple components featuring full relief detail. Separately applied metal detail parts, including horn grilles, roof grilles, lamp irons and aerials. Each model supplied with a full set of decorated, model-specific bufferbeam pipework and accessory parts.

Cab lighting, switchable on/off (at the leading end, when used on DCC only). Authentic light colours and temperatures selected for each model based on era and application. 21 Pin DCC decoder interface. Easy-access DCC decoder socket located underneath removable roof panel.

F23 - Volume Control (6 levels). Constructed at British Rail Engineering Limited, Crewe, the new locomotives were initially classified as 87/2s however this was soon changed to Class 90 as the design featured a completely new body-shell - although much of the technology within was shared with the Class 87s. Upon privatisation the Class 90 fleet was split between Virgin Trains, EWS and Freightliner.

By 1999 all of the Class 90/1s acquired by EWS had been converted back to 90/0s due to an increased requirement for passenger locomotives to work contracted ScotRail sleeper trains and for hire to GNER for East Coast Main Line services. Further renumbering by EWS occurred when nine locos were fitted with different brake blocks and these became Class 90/2s numbered in the 902xx series. The Freightliner locos were also converted back to their original specification in the early 2000s. 90128 was decorated in SNCB turquoise (Belgium), No.

90129 in DB red (Germany) and No. 90130 in SNCF orange and grey (France) and each carried the name Freightconnection in their respective languages, alongside No. 90022 which was named'Freightconnection' and carried Railfreight Distribution livery. The majority of the Class have carried names whilst in service and the 90s have appeared a variety of other post-Privatisation liveries such as GNER, DB Schenker, First ScotRail, One (Anglia), Greater Anglia, National Express, DRS and Malcolm Logistics. Today, Class 90s remain in operation with Freightliner, DB Cargo UK (ex-EWS/DB Schenker) and most recently Locomotive Services which has acquired Nos.

90001 and 90002 and repainted them into InterCity Swallow livery for use on charters and excursions. This item is in the category "Collectables\Model Railroads & Trains\Railroads & Trains\Locomotives". The seller is "kjb-models" and is located in this country: GB. This item can be shipped to United Kingdom.