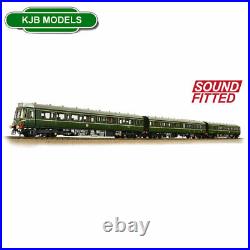 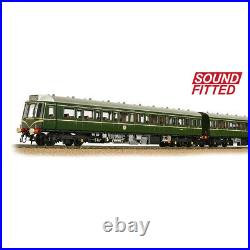 35-500SF Class 117 3 Car DMU BR Speed Whiskers. Brand new model from our new Yorkshire shop. Bachmann has designed the Branchline models of the Class 117 and its sibling, the single-car Class 121, from the rails-up, to achieve a new standard in fidelity to prototype in OO scale DMUs. The model is equipped with a low profile, underfloor driveline that permits reproduction of an unprecedented level of interior detail, with no intrusion from the motor. Bachmann SOUND FITTED model features realistic running sounds and much more - see full details of the sound functions below.

F26 - Air Tank Drain Down. Analogue Users: Please note that normal load running sounds and any other automatic or randomised sounds will also operate when this model is used on analogue control (DC) straight from the box!

The BR Class 117 diesel multiple units (DMUs) were built by Pressed Steel from 1959 to 1961. When first introduced, these three-car units were all based with the similar Class 121 single carriage (railcar) units on British Railways Western Region for suburban work out of London Paddington. The units were largely based at Reading and Southall depots and they remained here for many years working these services. The first shake up in ownership occurred in the late 1980s, when the Scottish, Welsh, Cornish and Birmingham based units were transferred to Provincial Services, later Regional Railways, in the sectorisation of British Rail, while the Southall-based units transferred to Network SouthEast. They were replaced on the lines out of Paddington when the Class 165/1'Network Turbo' units came into service in November 1992.

They remained in service on the former Western Region until replaced by Class 150 and Class 153 DMUs during 1993. An attempt was made to remove them from Cornish work using Class 142 Pacer units, but these non-bogie units proved to be a liability on the tight curves of the Cornish branches, increasing rail and wheel wear, and so the Pacers were moved to the North of England instead.

They were finally replaced when Class 150s and Class 153s became available, having been freed up from other areas. They continued to work in Scotland until January 1998 where they were replaced with Class 156s. For many years, passenger services on the Birmingham Cross-City Line were worked by elderly Class 117, along with Class 115, 116, 118 and 121 diesel multiple units, but all were withdrawn from service by 1995.

The seller is "kjb-models" and is located in Hensall. This item can be shipped to all countries in Europe.