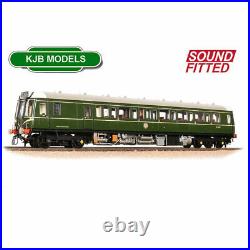 Class 121 Single-Car DMU BR Green Speed Whiskers. Brand new model from our new Yorkshire model shop. The Branchline model is equipped with a low profile, underfloor driveline that permits reproduction of an unprecedented level of interior detail, with no intrusion from the motor.

Coupled with this impressive technical specification is a wealth of detail incorporated into the bodywork and chassis, plus the usual high standard of livery application associated with Bachmann products. This SOUND FITTED model features realistic running sounds and much more - see full details of the sound functions below. Pristine BR Green (Speed Whiskers) Livery. Destination Blinds for Henley-On-Thames and Twyford. Illuminated Headcode Boxes and Destination Blinds.

Lighting can be controlled by chassis-mounted switches or via DCC. SOUND FITTED - See below for function list. SOUNDS F0 - Directional Lights - On/Off.

Analogue Users: Please note that normal load running sounds and any other automatic or randomised sounds will also operate when this model is used on analogue control (DC) straight from the box! Thought to be the UKs longest serving first generation Diesel Multiple Unit (DMU), the Class 121s were first introduced in 1960. Nicknamed Bubble Cars, a total of 16 Class 121 Driving Motor Brake Second (DMBS) units were built by the Pressed Steel Company between 1960 and 1961 following the same basic design of the Class 117, featuring the standard Derby cab and high-density seating. They were similar to the Class 122 DMUs but were distinguished by the presence of the four character headcode box above the cab. The single car units had a cab at each end, plus a guards area and seating for 65 passengers. Where additional capacity was required the Class 121s could be coupled with other DMUs that had blue square multiple working equipment. Delivered to the Western Region, the units were intended for use on branch lines in Cornwall and the Thames Valley. The Class later spread further across the Western Region, whilst also moving to other areas in due course, with several examples ending up with Network SouthEast following Sectorisation. Many of the Class were later repurposed for Departmental work although three remained in passenger service with Silverlink following Privatisation.

Chiltern Railways were the final operator of the Class 121s, using two for services between Aylesbury and Princes Risborough, the final unit was withdrawn in 2017. A significant number of the Class survive in preservation. The item "BNIB OO Gauge Bachmann 35-525SF DCC SOUND Class 121 DMU BR Green Speed Whiskers" is in sale since Tuesday, February 23, 2021.

This item is in the category "Collectables\Model Railways & Trains\OO Gauge\Locomotives". The seller is "kjb-models" and is located in Hensall. This item can be shipped to all countries in Europe.