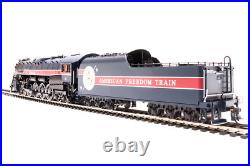 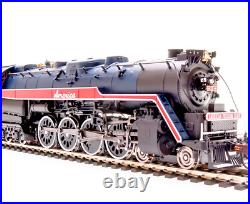 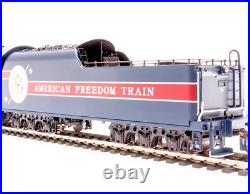 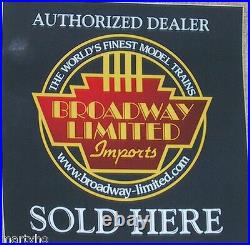 Choice of 3 selectable Horns. Alternate Whistle / Horn where applicable for locomotive with air horn and steam whistle - both the main whistle and alternate can be easily played.

Chuff sound intensity varies with load. Individually adjustable sound volumes for each effect. EZ Reset Button for quick return to factory default settings. PROTOTYPE HISTORY As WWII was drawing to a close in 1945, the Reading Railroad examined their existing roster of motive power and realized they did not own any of the super-power steam locomotives that most all other railroads owned and operated.

The decision to obtain some of these locomotives was paramount, but with wartime restrictions still in place, the Reading had to look to their existing fleet for conversion. The I10-sa Class 2-10-0 locomotive fit the bill, and Reading started the in-house conversion of 30 of these I10 locomotives to the new class T-1. Their operating territory included most of the Reading system, and they were also used in pool service with the Western Maryland Railway.

The Reading T-1's did not last long in service. All 30 were in storage by 1954, with a few returning briefly in 1955 due to a surge in traffic. The Reading Railroad did keep four of the T-1's for an excursion service that they called the Iron Horse Rambles. The plans were for 2100 and 2124 to pull the excursion trains, and they would keep 2101 as a back-up and 2123 as a source of parts.

The four T-1's used in the Iron Horse Rambles still survive today. 2101 was famously restored and used to pull the American Freedom Train in the mid-1970's. It was then repainted into the Chessie System livery in 1977 to pull the Chessie Steam Special, an excursion train running to celebrate the 150th birthday of the B&O Railroad. 2102 ran various fan trips for several decades, and is currently owned by the Reading Blue Mountain & Northern Railroad and is occasionally brought outside for display. 2124 is currently on display at Steamtown USA in Scranton, PA.

In our 2021 production, Broadway Limited is offering T-1 models in several variations. We are building three in-service Reading models and three "Iron Horse Ramble" models. We are offering 2101 in the Chessie Steam Special livery and also its later Reading & Northern paint scheme. We are offering two versions of the American Freedom Train - one with its early 1975 appearance, and one with the later 1976 appearance. We are also offering one model decorated like the Delaware & Hudson #302 locomotive.

Finally, we are offering two fantasy paint schemes: one with a unique Christmas theme and a second with a United States Independence Day theme. The two fantasy models will have unique soundsets, and the others will have prototypically accurate Reading T1 Northern sounds.

This is not something that we can modify. Please keep in mind that most of the electric items we sell are designed for use with 120V AC and come with a North American style plug. Use of products outside the US may require a power adapter and convertor, which are not items that we supply. This item is in the category "Toys & Hobbies\Model Railroads & Trains\Railroads & Trains\Locomotives".

The seller is "martyho" and is located in this country: US. This item can be shipped worldwide.